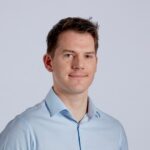 “Although the role is a very challenging one, for me I find it enjoyably varied and very rewarding, and crucially increasingly so as the years go by” – Tom Harding talks us through his career, from scientist to Partner at Potter Clarkson.

After first toying with the idea of entering the patent profession during university, I instead spent my first few years in the world of work as a lab-based research scientist before finally embarking on my career as a patent attorney. In 2009 I joined Potter Clarkson, where I am still based today, working from our Nottingham office as part of our Life Sciences team. Along the way I qualified as a European and UK Patent Attorney in 2012 and 2013, respectively, and became a Partner in 2018.

My undergraduate degree was in Genetics (first class) which I followed up with a MSc in Applied Biomolecular Technology (distinction), both at the University of Nottingham. I had always loved studying science, but I was unsure about then entering academia and having to choose just one particular aspect on which to focus going forward. I think it was a combination of a careers talk from a patent attorney during my undergraduate and a research placement at a small biotech during my MSc, where the group were in the process of filing their own patent application, which got me seriously interested in the role. It also helped that a couple of my friends had parents working in the profession so I could gain a bit of extra insight that way – quite a coincidence given the relatively small size of our profession.

Ultimately, I really don’t regret first working as a scientist in the lab. Firstly, it gave me a good practical grounding in much of the subject matter I still come across today which helps a lot in discussions with inventors who are generally lab scientists themselves. However, it also made me realise that research was not the career I wanted to pursue long term and that becoming a patent attorney would be a better fit. For me, it was the ability to utilise my scientific background in a more commercially focussed role, and to work across much more diverse areas of novel science than my research job allowed. I was also attracted by the relatively structured career progression and certainty. Variety of subject matter was also the reason I chose to enter private practice as it allows me to work for multiple different clients, rather than joining the patent department of one big company and focussing only on the technology they generate in house.

My life as a patent attorney

Since joining the profession, I followed the usual path of shadowing a qualified attorney whilst working as an assistant which built up my experience across all aspects of the job. Alongside this I studied for my UK and European Patent Attorney qualifications, sitting my first professional exams in 2009 and my last one (thankfully my only re-sit!) in 2012, progressing to an Associate where I began to have responsibility for my own cases.

Since then I have progressed through Senior Associate to Partner, taking sole responsibility for my own clients, and recruiting my own trainee in 2017 – through whom I can relive the whole process over again!

Now a partner, my role is increasingly varied. I have always enjoyed the challenge of the traditional daily aspects of the patent attorney role, from drafting patent applications and designing global strategies to provide the most appropriate protection for my client’s inventions, through convincing patent office examiners around the world that those applications are indeed patentable, to oral advocacy at patent office hearings when opposing the validity of a patent held by a client’s competitor or defending my client’s own patent. However, I now get to additionally focus on the more commercial aspects of my own firm’s business. For me this has included a particular focus on developing our business in the US and the Nordics, as well as coordinating management of trainees in our department. Each of these has been very rewarding and it means I travel multiple times a year to the US and Scandinavia to meet current and potential clients, adding some variety beyond the usual foreign destinations for UK-based patent attorneys, namely the European Patent Office in Munich or The Hague for oral hearings!

Becoming more senior has therefore added even more diversity to the role. Another benefit which is often overlooked is the large number of different types of people with whom I have a regular working relationship, despite my role being predominantly desk-based. The people I communicate with daily are spread across the globe, often with different backgrounds, different roles, and of course different personalities. This includes day to day working with my colleagues at Potter Clarkson, which now includes those based in our new Copenhagen and Stockholm offices, as well as our UK offices in Nottingham and London. Then of course there are my clients who are based throughout the UK, but also further afield such as in Scandinavia and the US, as well as the associates I work with across the world assisting my clients in obtaining patents in different territories, and also the examiners at the European Patent Office and UK Intellectual Property Office.

In summary, although the role is of course a very challenging one, for me I find it enjoyably varied and very rewarding, and crucially increasingly so as the years go by.