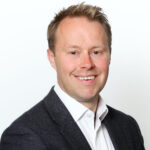 Bobby Smithson graduated from the University of Leeds with a first class degree in Chemistry in 2002 and joined Appleyard Lees as a trainee patent attorney in the same year. He qualified as both a UK and a European Patent Attorney in 2006, and became a Partner at the firm in 2009.

“I bought a suit, printed out copies of my CV and walked around Leeds visiting patent firms in the city without an appointment” – Bobby Smithson talks us through how determination and tenacity eventually led to a Partnership at Appleyard Lees.

I wanted to be a solicitor from a young age. I didn’t have a good reason – I was only about 12. I think it was because they were slightly revered and also they were the person that you called when you needed help. I wanted to be that guy.

During secondary school and especially into my A levels I showed a keen interest in Chemistry. That interest, combined with a brilliant A level chemistry teacher, led to a desire to find a job in which chemistry and the law were combined. In 1996 as a 17 year old A-level student, I wrote to BP in Hull to ask if I could do some work experience in their patents department in the summer holidays. They graciously wrote back and said that they only offer that kind of thing to people with a good degree in chemistry or chemical engineering. So I decided that was what I would do. In 2002 I graduated from Leeds University with a first in chemistry.

Getting a job as a patent attorney in 2002 was hard. There were lots more good graduates than there were trainee positions. Today, I am afraid to say, it is possibly even harder. I applied to over 50 firms and I got about 10 letters back, all rejections. The other 40 didn’t bother to respond at all. Faced with this, I tried to take matters into my own hands. I bought a suit, printed out copies of my CV and walked around Leeds visiting patent firms in the city without an appointment. It is surprising how willing people are to talk to you when you make the effort to put yourself in front of them. Although this strategy didn’t immediately lead to a job, it did allow me to speak to a number of patent attorneys and trainees to get an insight into the profession. One firm even took me to the pub with them. A few months and a many more rejections later, I had a call from Appleyard Lees – one of the firms in Leeds that I had visited. It seems that my CV along with an account of my eagerness had made it on the chemical partners desk and a trainee vacancy had arisen.

To get into the profession, academic prowess is probably not going to be your distinguishing factor. The academic achievements of the CVs I see is staggering, often with a first in their undergraduate degree, a PhD and post doctoral experience. However, one thing I have seen again and again through my years in the profession is that the people who really want a job, really stand out. Those who are willing to go the extra mile. Those who take it upon themselves to do IP courses. Those who turn up at patent events. These candidates more often than not will find a way into the profession. You need, above all, to be tenacious.

Qualifying as a patent attorney is difficult and takes a long time. The tenacity you will have shown to get into the profession will set you in good stead! One thing I would say is that all patent attorneys have been through it, which shows that it is, at least, possible. Most firms will offer various support such as external training, internal tutorials, study days etc., but ultimately it is down to you to put the time and effort in.

In my experience, although the study was long and difficult, it gave context to the work that I was doing every day in the office. This (sort of) made it enjoyable, but it certainly made me realise why I was doing it. I qualified as a UK and European patent attorney in 2006, four years almost to the day after starting in the profession.

Being a patent attorney is a very varied job, but the type of work you do is directed by your clients and their requirements. I do a lot of opposition and appeal work at the EPO, so I am regularly at hearings in The Hague or Munich – that is the nature of my clients’ businesses. Some attorneys do very little of this work, because their clients do not get involved in these types of matters. Some clients mostly require advice and guidance on other people’s IP, whereas some clients mostly require you to draft and file patents on their IP. Some clients may be qualified patent attorneys themselves (perhaps in other jurisdictions) and give you very clear instructions, some will require much more input to help them understand the issues.

In 2009, at 29, I was invited to join the Partnership of Appleyard Lees. This was what I had been working toward since I started in the profession, although if I am honest, I was not sure what it entailed. In partnership, you occupy a strange role that is both worker and business owner. Sort of like being a player manager, if you’ll excuse the football analogy. As an example, as well as client work, I am in charge of the Japanese practice of Appleyard Lees. This involves monitoring all of the work that we do with Japan and keeping good relationships with our Japanese associates. In view of this I visit Japan at least once a year – just because it’s hard work, doesn’t mean that you can’t also enjoy it.