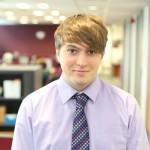 It seems to be a similar story for many people in my position, but as I neared the end of my degree I realised that research and a PhD probably weren’t for me. Towards the end of a Master’s degree, my knowledge was becoming ever more specific, and my final year project was taking me into a very niche area of physics.

Discussions with my supervisor led to my eyes being opened to the possibility of becoming a patent attorney, and I knew immediately that this was something I’d be greatly interested in.

The chance to experience a wide range of cutting edge technologies held, and still holds, a great deal of appeal for me. The opportunity to study in the field of law, an area in which I had no previous experience, also tempted me, and I was keen to utilise the technical knowledge that four years of a science degree had provided me with.

Even the prospect of another few years of exams wasn’t enough to dissuade me, and so I decided to begin searching for a role as a trainee patent attorney.

Getting a job at AdamsonJones

Having decided that a career as a patent attorney seemed like the perfect fit for me, I began my search, as most job applicants inevitably do, by sending off a CV and a covering letter.

I was fortunate enough to hear back from AdamsonJones, and was offered the chance to conduct a telephone interview with the directors of the company. In this initial telephone interview we discussed various subjects including my background and the relevant skills I thought (was sure!) I possessed for the role, along with my interest in the profession in general and why I’d chosen to apply to the company.

After passing this initial hurdle I was then invited to Nottingham to attend a two day selection programme. This turned out to be a surprisingly enjoyable two days where I got the chance to meet current trainees, learn more about the profession in general, and of course attend interviews and undertake various aptitude tests. Shortly after the programme I was offered a role as a patent assistant with AdamsonJones, and I didn’t hesitate to take up the opportunity.

Life as a patent assistant

As a patent assistant at AdamsonJones I spend much of my time working with the qualified attorneys of the Physical Sciences and Engineering team. I assist with all aspects of patent drafting and prosecution, including preparing draft documentation, corresponding with clients, the UKIPO and EPO, and overseas associates, and attending meetings with clients.

I’ve recently had the chance to assist with the drafting of patentability and infringement advice, and have found this aspect of the job to be very interesting, yet demanding at the same time. Perhaps my favourite part of the job is the highly varied nature of the work I get to carry out. I never know what I’ll be working on from one day to the next!

As well as assisting my colleagues, I spend my time carrying out training activities and beginning to work towards taking my first set of exams in October 2013. I’m told that the exams are pretty tough but there is a lot of support available at AdamsonJones, both in the form of organised tutorials and in general discussions as part of my daily work.

The ability to communicate clearly and effectively, both in writing and verbally, is essential for any potential patent attorney. Effectively explaining a situation to a client, or trying to effectively communicate a point to an examiner, is something which occurs on a daily basis.

Organisation is also key as there are always many deadlines to juggle and being able to prioritise your work helps to keep things under control. Precision and attention to detail are also important. It’s surprising how often a seemingly minor detail will actually turn out to be the crux of an important argument.

A touch of creative flair can prove to be useful when trying to overcome a particularly tricky objection by an examiner. It doesn’t hurt to be fond of a good argument either!

Try picking up everyday household objects and thinking about how you would go about describing them, both in terms of appearance and function. This might sound strange, but trust me it will help! I would also suggest taking the time to read through a few patent specifications in order to get used to the language and terminology used. Databases like the EPO’s Espacenet let you do this easily. Organisation websites such as the UKIPO and CIPA also provide background information on the profession.

It’s advisable to research a company thoroughly before deciding to apply. There are many different approaches to training, in particular to the CIPA foundation examinations. Some trainees take the Certificate of Intellectual Property Law course at Queen Mary, University of London, which exempts them from the foundation papers; other companies (including AdamsonJones) follow the conventional exam-based path. Either way, look hard at each firm’s track record in getting trainees through to qualification.