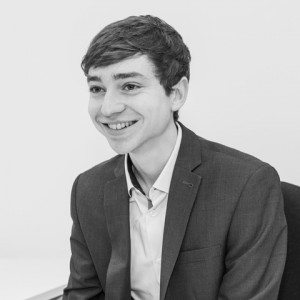 At university, I studied a joint-honours course in Physics and Philosophy, since I was keen to include aspects of both science and arts in my degree. As I came to investigate possible careers, this same mix still appealed and, after researching the intellectual property profession, it became clear that the role of Patent Attorney could provide an excellent balance between both application of scientific knowledge and training as well as the exercise of more linguistic skills of argument and analysis.

On interviewing at Elkington and Fife, I was struck by the firm’s welcoming, relaxed atmosphere and felt straight away that it would be a place I would be happy working and training. I was lucky enough to be offered a trainee position, and joined the electromechanical group in August 2014.

The training at Elkington and Fife is very much hands-on, and from my first day I was working on real cases for clients. The work that the group handles is extremely varied, spanning across a broad range of different technical areas – meaning no two days are ever quite the same! Each new case requires spending time understanding the particular technical field of the invention, as well as the specific details of the case itself, which can mean a lot of reading and time spent researching.

As time has gone on, the range of work I am exposed to has increased and I have found myself charged with an ever greater variety of tasks and responsibilities – which has only made the job more exciting and interesting. With increasing experience, so I have also been afforded an ever greater autonomy over managing my own caseload and deadlines. While this certainly introduces new challenges and pressures, it also increasingly makes the role a much more stimulating and fulfilling one. Trainees I have found are very quickly made to feel an essential part of the team, whose work can make a genuine contribution to the success and profit of the firm.

After around a year in the role, trainees are invited to enrol in the Queen Mary IP Law course, which provides exemption from certain qualifying examinations. While undoubtedly highly demanding, I found the content of the course to be extremely interesting. This was the more so for having already gained some prior grounding in the fundamentals of everyday patent work – since it was clear how the subjects I was studying could have direct application to my real world work (not something which was always the case during my undergraduate degree!).

From my time so far in the role, I have found the job to be stimulating, challenging and always interesting. For anyone who is keen to utilise their scientific knowledge in a non-laboratory setting, and is excited at the prospect of retraining in a new profession at the same time, I would thoroughly recommend joining the patent profession, and doing so with Elkington and Fife.